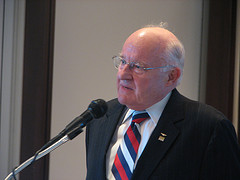 Somewhere along the line – as partisan mudslinging increased over the Iraq War – the concepts of patriotism and service to one’s country became contorted to fit the various political agendas. One pundit argues that it is unpatriotic to question the War, and a politician comes back and says it would be unpatriotic not to.

All of this political rhetoric faded – if only for an afternoon – when I listened to CACI Chairman Jack London speak of his 12 years of active duty in the U.S. Navy at the ExecutiveBiz “Been There Done That“ lunch series event held last month. Mr. London cited and how traits and skills developed during military service ““ tenacity, integrity and commitment ““ contributed to his success in a corporate environment. These three traits overlap with the stated Navy Core Values Charter, under which the servicemen pledge honor, courage and commitment. It was evident that afternoon Mr. London’s passion for serving his country had nothing to do with politics, and instead was in many ways shaped by two centuries of ancestors who served in the U.S. military.

Interestingly enough, it turns out that Mr. London is not alone among government contractor executives when it comes to a Navy background. Cross checking Navy alumni with some of the largest and most respected government contractors in the DC region and you are left with a who's who of local business leaders. While there is no shortage of executives who served time with other branches of the military, Naval experience seems top pop up frequently on their resumes.

Mr. London's reflections on the Navy's role in shaping his professional and personal development mirror those of Bill Hoover, President and CEO of American Systems. During his spotlight interview with ExecutiveBiz, Mr. Hoover, a veteran officer of the US Navy and US Naval Academy graduate, shared that time with the Navy taught him to set his goals high and help others believe they are capable of accomplishing anything.

Jerry B. Agee, Corporate VP and President, Northrop Grumman Mission Systems, joined the company in 1987 following an extensive career as a U.S. Naval Intelligence officer. During his ExecutiveBiz interview, Agee credited his time with the Navy in providing the foundation for a leadership role. He added that the Navy was a uniquely dynamic environment requiring rapid but sound decisions, and that officers learned how to analyze the big operational picture.

While each man's path was a little different, the final destination was the same. And the more you listen to these executives talk about their personal and professional experiences, the less coincidental it becomes. At a high level, you see a group of men who passionately served their country for years ““ in some cases decades. When their active tours of duty ended each looked for outlets where they could continue to serve in some way. Logically, each found himself with a company in some way responsible for arming the military and other agencies with the weapons, technology and expertise necessary to protect citizens.

But that could hold true for every branch of the military, so what is it about the Navy? Dig a little deeper and you find that these executives cite a powerful combination of leadership skills and marketable IT and technical skills that their active duty service in the Navy provided ““ skills that became readily transferable to the corporate environment.

Translation: if I were locked in a room with a ticking bomb that needed to be diffused in 30 seconds ““ and Jack Bauer was unavailable ““ Mr. Ballard would be my man.

Phil Nolan, Chairman, President and CEO of Stanley, Inc., was even more direct in addressing the dual set of skills he acquired during his time on active duty in the Navy. In a December 2006 ExecutiveBiz spotlight interview, Mr. Nolan spoke of how working on a daily basis with contractors provided an essential understanding of the government-contractor relationship and the ins and outs of the selection process. Those tangible skills, Mr. Nolan added, were supplemented with the Navy’s emphasis on teamwork and leadership that he took with him to the private sector.

Earlier I spoke of perspective, and how it is often hard for those with strong viewpoints to put themselves in someone else’s shoes. Perhaps the most valuable takeaway for these executives when it comes to providing services and support for men and women in the military is that they’ve been there. They understand the perspective of the soldier during both times of war and peace.

Brad Antle, CEO of SI International, hinted as much when he told ExecutiveBiz during his spotlight interview that serving in the Navy on both active duty and the Reserves offered an appreciation and sensitivity for what it means to be a soldier. It isn’t a bunch of suits making business decisions thousands of miles away from the front lines, but instead these former Navy servicemen have been there, and understand what it takes for those serving in the Navy – and other branches of the military – to do their jobs successfully.

While active duty service may have officially ended for each man, their employers, the region and the country benefit each day from their unwavering passion and commitment to the country they still serve.

—
Brian Lustig is co-founder of Lustig Communications, a Rockville, MD-based communications firm that works with growing technology and government IT firms. Lustig is also a contributor to local business and industry publications.