Earlier this month ExecutiveBiz highlighted ten area executives in relatively new roles who we expect to be firmly placed in the 2008 spotlight. Perhaps these executives can take their cue from another set of leaders who have grown quite accustomed to being in the middle of the action. ExecutiveBiz's “Beltway Game Changers“ recognizes 10 prominent names who are not only well-known commodities within the DC government contractor community, but heavy hitters who lead some of their organizations’ largest and most critical business units.

The ten executives listed below have lofty goals to achieve and tens of thousands of employees to lead and motivate. Not surprisingly however, they are ten leaders with the track record and pedigree to hit all of their marks.

Jim O'Neill ““ President, Northrop Grumman IT
Staff meetings were probably a little easier to arrange decades ago when O'Neill entered the government technology space as a contract negotiator for Sanders Associates (now BAE Systems). Today, as President for the largest employer in the Commonwealth of Virginia, communicating and motivating 18,500 employees requires a little more strategic coordination. But, as he said when interviewed by ExecutiveBiz in early 2007, the company's product is the employee which means that every single person is critical to the firm’s success.

As one of 30 companies awarded part of the Alliant ID/IQ Contract, O'Neill ““ and all NG employees ““ are in store for a busy 2008. Despite the commitments required with his day job, O'Neill served as the 2007 chairman of the Professional Services Council; recently joined the Board of Directors of Lee Technologies; and is a board member of the Northern Virginia Technology Council and the Security Affairs Support Association.

Bill Hoover ““ President & Chief Executive Officer, American Systems
Some executives ““ perhaps concerned about failing to meet lofty expectations ““ keep their corporate growth plans buried deep within the bowels of the C-Suite. Hoover however, has never been one to shy away for aiming big and hitting the mark, and he put a definitive stake in the ground by securing a $75 million expandable line of credit to have on hand for his aggressive acquisition plans.

Hoover has not even hit the three-year mark at American Systems, but he's made a quick mark at the company with a plan to hit tier one status sooner rather than later as part of corporate vision/2012.

Linda Gooden ““ Executive VP, Lockheed Martin Information and Technology Services
After transforming a small division at Lockheed into a 14,000-employee operation it surprised few when Gooden was promoted to her current role January of last year. The U.S. Black Engineer and IT Magazine 2006 Black Engineer of the Year is now engineering a 52,000-employee Lockheed business area that embodies a concerted realignment from traditional defense contractor to fast-growing IT services.

Dan Johnson ““ Executive VP, General Dynamics Information Technology
Johnson's bio indicates he is responsible for the day to day operations of GD's 16,000 person Information Technology unit ““ which no doubt makes for some long days balancing short-term operational needs with long term objectives. The IT unit – formed after the December 2005 Anteon acquisition – is chugging along under Johnson’s stewardship as he aligns the two firms' expertise (networking and mission-based services) together.

Brad Antle ““ President and CEO, SI International
In an ExecutiveBiz blog posting back in October, I cited Antle's published commentary in the Washington Post about scrutiny directed at government contractors. Because Antle is held in such high esteem inside and outside the government contractor community, he was the ideal thought leader to remind readers in that piece how the overwhelming majority of contractors are playing a critical role in aiding government and military operations.

Antle assumed his current role over three years ago, and the company's mantra of Rapid Response “¢ Rapid Deployment® seems to be paying off as SI brought in $450 million in Federal Contracts (if all options are exercised) during September of last year alone. Beyond the revenues however, Antle has the company on a path that has earned the respect of peers. SI was named 2007 Contractor of the Year at the 5th Annual Greater Washington Government Contractor Awards.

Greg Baroni ““ President, Federal Systems, Unisys
While Presidential election uncertainty can be good news for lobbyists ““ who typically thrive when clients need to cover all bases ““ election years can be challenging for Government Contractors that will see ambitious new and lucrative Agency initiatives fade as November approaches.

As Baroni cited when interviewed for a recent Washington Technology story, Unisys' Federal Systems Unit must certainly contend with that reality. But, Baroni adds, he is leading an aggressive charge to secure the most strategic and significant opportunities out there for 2008 ““ first and foremost holding on to the DHS Information Technology and Managed Services contract (the next iteration of which could be worth up to $1 billion) it has been fulfilling since 2002.

Baroni has helped to transform Federal Systems into a true leader in providing solutions to secure the government enterprise, and while the election year will invite the unknown for contractors, he is focused on making growth and new wins a certainty.

Donna Morea ““ President, U.S. operations and India, CGI
CGI-AMS might be one of the more acronym-loaded post-merger names inside the Beltway, but Donna Morea is one name that has always rolled off the tongue frequently ““ and favorably ““ within the Federal IT community.

Morea jointed AMS in 1980, and has gradually extended her leadership and involvement with area business and technology organizations ““ including her current role as Vice Chair of the NVTC. All of this while not only successfully integrating CGI and AMS, but growing it as well through what she described to ExecutiveBiz back in May as a “evolutionary rather than revolutionary“ approach to winning business.

Morea's interests are as diverse as her background ““ which focused as much on the arts as it did on business pursuits. Known throughout the community for her role as Chair of the 2007 Kidney Ball, and perhaps by pasta fans for her Internet-based Italian oil business. The good news for CGI is that while Morea's oil might be saturated (the good kind, right), the market opportunities for her company to grow in 2008 aren't.

Mike Bradshaw ““ Head of Federal Enterprise, Google
I've always wondered what happens when a Google employee Google's himself. Perhaps the entire system implodes or banishes the employee to the 5th dimension. Regardless, if Mike Bradshaw, head of Google's Federal Enterprise Unit, conducts a search these days it is likely that far more content will come up as the ever-expanding behemoth continues to make Federal IT inroads.

The Federal team has roughly quadrupled over the past year and extended its focus from search to Google Maps, Google Earth and security product offerings resonating within the Federal enterprise. Bradshaw's predictions made to ExecutiveBiz about where the Federal space is headed in 2008 offers a window into the pain point Google hopes to address with Software-as-a-Service (SaaS) tools that Government organizations can use for collaboration, security and efficiency.

Mark Johnson ““ Senior VP, Oracle Public Sector
While enigmatic chief Larry Ellison is always the one associated with Oracle, the name Mark Johnson is becoming increasingly recognized within Federal IT circles as Oracle extends its plug-and-play methodology to the public sector.

The company's recent acquisition of BEA Systems will aid Johnson's Public Sector operation when pitching Agencies on how to improve efficiencies via SOA. Johnson is a long-term fixture at the company, and has been a tremendous part of the Public Sector unit's ability to penetrate the market ““ 100 US federal government agencies – and 1,500 public sector organizations ““ now run Oracle applications to improve efficiency and accountability.

Rick Marcotte ““ President and CEO, DLT Solutions, Inc.
Before Marcotte was leading the charge to drum up Federal business for DLT Solutions, he was a drummer (don’t worry Rick, the hyperlink doesn’t take readers to an old photo) in a rock band during high school. While the long hair might be gone ““ thankfully not all of it ““ Marcotte's growth plan has DLT's vendor-centric model rocking and rolling along just fine.

In the hyper-competitive VAR market, Marcotte continues to help DLT achieve aggressive growth ““ evidenced by its recognition as one of the Inc. 5000 fastest growing private companies; Federal Times top 100 contractors and a top government integrator and GSA vendor. 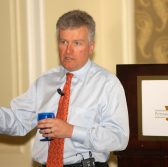