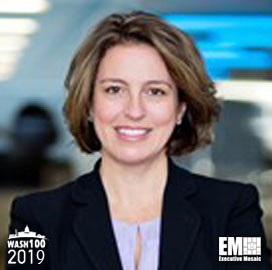 Executive Mosaic is honored to introduce Tiffanny Gates, president and CEO of Novetta, as an inductee into the 2019 Wash100 “” Executive Mosaic“™s annual selection of most influential voices in the government contracting arena “” for her efforts to increase the company“™s workforce by exploring cloud-based platforms, big data and information technology. This marks her first Wash100 award.

Gates served in the U.S. Navy as a cryptologic officer from 1995 to 2000 before entering the private sector and held leadership positions with Raytheon, Booz Allen Hamilton, ManTech International and Blackbird Technologies. She was appointed president of Novetta“™s federal division before assuming the role of CEO in March 2017.

In addition to her executive responsibilities, Gates also serves on the Alliance for Digital Innovation board focused on fostering the U.S. government“™s IT modernization goals. Under her leadership, the data analytics firm was listed as one of Washingtonian magazine“™s top 50 best places to work in 2017 following the creation of workforce-focused initiatives, including staff certification and technical training programs.

During her tenure, she also helped launch the Novetta Entity Analytics big data offering on the Amazon Web Services Marketplace vehicle; and the company“™s expansion into utilizing machine learning for processing text, images and behavioral analytics.

In an April 2018 interview with ExecutiveBiz, Gates said Novetta was exploring the use of cloud-based platforms run by machine learning technology such as Amazon Sagemaker and MXNet to support defense and intelligence sector customers. She added that Novetta“™s 20 years of experience preparing and handling large datasets will aid the company in providing support to its clients.

Novetta took another step in its cloud efforts after closing the acquisition of IT firm Berico in November to leverage the latter“™s cloud engineering expertise for intelligence community projects. In the same month, Novetta reported that the company secured $410M in contracts in 2018 and expects to see a 49 percent year-over-year increase in new contract work.

Gates noted that the company“™s projects with AWS and Elastic resulted in a 30 percent workforce increase and more investments in new tech domains such as cybersecurity and artificial intelligence. She expressed her support to promote innovation and growth among the company“™s workforce, 22 percent of whom are women.

Commenting on the gender disparity within the government contracting community, Gates admits that there is a scarcity of women holding positions in the industry. However, she noted that there is an increasing amount of local and national programs providing opportunities for women in the tech sector, including the company“™s own Women in Novetta initiative.

“I anticipate as the number of women in tech grow, the pace of the industry will accelerate, as many creative ideas for development have yet to be heard,“ she said.

Executive Mosaic congratulates Tiffany Gates and the Novetta team for receiving this award.