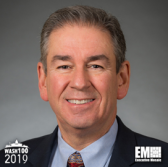 Executive Mosaic is honored to introduce Dave Wajsgras, president of Raytheon’s intelligence, information and services segment, as an inductee into the 2019 Wash100 — Executive Mosaic’s annual selection of most influential voices in the government contracting arena — for leading the development of “organic” R&D and securing major contracts from several federal agencies. This marks the fifth consecutive Wash100 award for Wajsgras.

Since 2015, Wajsgras has been serving as president of the IIS business, which handles work such as intelligence, surveillance, cybersecurity, reconnaissance, logistics, engineering, navigation and technical services supporting public and private sector clients around the world. The company provides its services to the military, the Federal Aviation Administration, the National Oceanic and Atmospheric Administration, NASA and the Department of Homeland Security.

Under Wajsgras’ leadership, the IIS unit develops products based on “organic” research and development, including insider threat offerings that have been deployed by the U.S. government.

One of Raytheon’s major awards is the potential five-year, $1B Development, Operations and Maintenance cybersecurity contract awarded in 2017 to develop the National Cybersecurity Protection System for more than 100 agencies using a .gov domain. During an interview with the Federal News Network in July 2018, Wajsgras said the company has achieved a full operational capacity for the system after completing the transition phase.

Before he joined Raytheon, Wajsgras held leadership positions at Lear Corp., Englehard and Honeywell International. He serves on the board of directors for various cyber and academic organizations and was recognized as an executive champion of Raytheon’s employee resource group for persons with disabilities.

Executive Mosaic congratulates Dave Wajsgras and the Raytheon team for receiving this award.