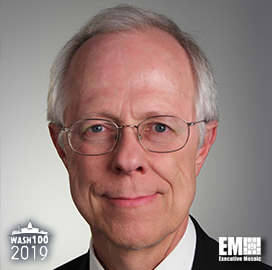 Executive Mosaic is pleased to introduce David Berteau, CEO of the Professional Services Council, as an inductee into the 2019 Wash100 “” Executive Mosaic's annual selection of the most influential voices in the government contracting arena “” for leading the efforts to improve the government's procurement and funding issues. This marks the second Wash100 award for Berteau in the last three years.

Berteau has been serving as PSC's CEO since March 2016. In this role, he leads over 400 members wanting to address legislative and regulatory matters involving crucial government acquisition procedures. As head of the federal services group, Berteau has been vocal on his insights regarding the government's procurement and funding issues.

Last year, Berteau explained that it is unprecedented for federal agencies to obligate as much as $300B in appropriated funds before the end of fiscal year 2018. According to Berteau, this amount accounts for almost 50 percent of the yearly total in three months.

In November, he discussed the private sector’s concerns regarding the Department of Defense's planned takeover of security clearance responsibilities from the Office of Personnel Management.

Berteau said in an interview with Government Matters that industry is concerned about potential challenges such as clearance backlog, funding and reciprocity for contractors that were cleared for certain projects. However, Berteau noted that the transition of duties would also bring benefits such as increased security, continuous evaluation and reduced costs.

According to Berteau, one of the programs that contractors are on the lookout for in the fiscal 2019 appropriations bill is the Department of Defense's Deliver Uncompromised initiative.

“The premise of Deliver Uncompromised, and some accompanying comments that DoD has made both in testimony and in public speeches, has indicated a big shift “” and probably an appropriate shift “” to spending more time on the security,“ Berteau said in August. “Not only the security of systems, but the security of data, the security of communications, a broad array of, I would say, more than cybersecurity even,“ he added.

Prior to his PSC role, Berteau served as assistant secretary of defense for logistics and materiel readiness, where he oversaw the DoD's logistics operations worth around $170B. Before that, he served across various leadership positions at Science Applications International Corp., Clark & Weinstock, the Center for Strategic and International Studies, the DoD and various educational institutions.

Executive Mosaic congratulates David Berteau and the PSC team for their selection to receive this award.