Leonardo DRS and Rolls-Royce want to offer the U.S. Navy new propulsion and power systems that would give new energy saving and warfare capabilities to the service's modernized fleet of warships, National Defense Magazine reported Monday.

McMullin said the British Navy is already using a hybrid-electric systems in its Type 26 frigate and South Korea is also expecting delivery of the same technology from Leonardo for the country's FFX II and III frigate programs.

Sam Perez, vice president of customer relations for the Navy at Rolls-Royce North America, said the company designed the power system to be “very quiet“ and to provide ships with 3,000 kilowatts of power. 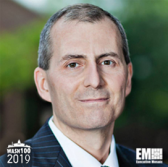