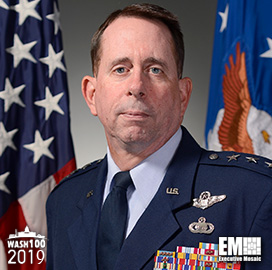 Executive Mosaic is honored to unveil Air Force Lt. Gen. Jack Shanahan, director of the Department of Defense’s Joint Artificial Intelligence Center, as an inductee into the 2019 edition of the Wash100 “” Executive Mosaic's annual selection of the most influential voices in the government contracting arena “” for his leadership in accelerating the implementation of artificial intelligence-driven tools and activities in the joint force.

Shanahan assumed his current position in December 2018 after he concurrently served as director of defense intelligence for warfighter support and  Algorithmic Warfare Cross-Functional Team, also known as Project Maven.

In a keynote speech at the Potomac Officers Club Future of Algorithmic Warfare Forum in July last year, Shanahan described his job as “understanding where the DoD needed to go with artificial intelligence and getting us to the next step.”

“The future of human-machine interaction lies in people leveraging AI capabilities to maximize efficiencies across the government and industry,“ he said at the event.

As Project Maven director, he led efforts to convert video surveillance into actionable  intelligence. His goal was to “let the machines do what machine do well, and let humans do what only humans can do.“

He explained that getting AI to work in systems that were never intended to use the technology is a great challenge and proposed using commercial solutions and creating a common foundation for managing the technology.

Project Maven continues to expand with the U.S. deploying AI systems in the Middle East. The hope is that the technology will be incorporated into larger UAVs such as the Predator and Reaper drones by the end of 2019. Shanahan expects the project to boost support for AI operations in other defense programs and the military will use the technology in ways that are yet to be identified.

Shanahan served as the commander, 25th Air Force, Joint Base San Antonio-Lackland, Texas. While there, he led 30,000 personnel in worldwide intelligence, surveillance and reconnaissance operations. In 1984, he received his commission as a distinguished graduate of the ROTC program at the University of Michigan.

During his career, Shanahan received the Distinguished Service Medal, the Air Force Commendation Medal, the National Defense Service Medal with bronze star and many other awards. In 1994, he was Warrior of the Year, 4th Wing, Seymour Johnson AFB, N.C. and won the Commandant's Award for Excellence in Writing at the National War College in 2001.