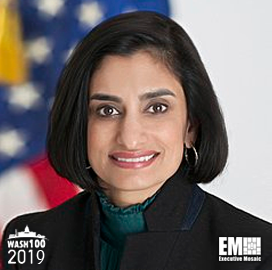 Executive Mosaic is honored to introduce Seema Verma, administrator of the Centers of the Centers for Medicare and Medicaid Services, as an inductee into the 2019 edition of Wash100 “” Executive Mosaic's annual selection of influential leaders in the government contracting arena “” for guiding health policy and helping patients access and share personal medical data. This marks the first Wash100 Award for Verma.

The Senate confirmed Verma as CMS administrator in March 2017. In her role, she oversees the agency's $1T budget and administers health care programs for more than 130M citizens.

“Today, we are calling on private health plans to join us in sharing their data with patients because enabling patients to control their Medicare data so that they can quickly obtain and share it is critical to creating more patient empowerment,“ Verma said at the Las Vegas event.

Verma addressed specific issues such as the pre-existing conditions clause in the Affordable Care Act, Medicaid work requirements, Medicare wage index, Medicare's role in the opioid epidemic and Medicaid's drug classification before the Senate in August. She also called for fax machines to be replaced with digital health systems in physician offices to facilitate patient data sharing.

“If I could challenge developers on a mission, it's to help make doctors and offices a fax free zone by 2020,“ Verma said at the Office of the National Coordinator for Health IT Interoperability Forum. “As head of CMS, one of my main missions is breaking down barriers to interoperability.“

Verma brings over 20 years of experience in Medicaid, healthcare policy, public health and insurance to her role at CMS. She led efforts to guide health policies in both public and private sectors and is known as the architect of the Healthy Indiana Plan.

Previously, Verma served as president, CEO and founder of health policy consulting firm SVC and vice president of planning at the Health and Hospital Corporation of Marion County.

Executive Mosaic congratulates Seema Verma and the CMS team for receiving this award.

The Wash100 award, now in its sixth annual year, recognizes the most influential executives in the GovCon industry as selected by the Executive Mosaic team in tandem with online nominations from the GovCon community. Representing the best of the private and public sector, the winners demonstrate superior leadership, innovation, reliability, achievement and vision.

Visit the Wash100 website to learn about the other 99 winners of the 2019 Wash100 Award. On the website, you can submit your 10 votes for the GovCon executives of consequence you believe will have the most significant impact in 2019. 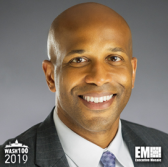