The company said Feb. 26 it also saw a 50-percent growth in revenue from its work with the U.S. Air Force and total contract bookings of $1.4B, with an estimated $350M accounting for new business over the past year.

Prow, who also serves as president of Vectrus and is a 2019 Wash100 awardee, mentioned several deals that have contributed to the company’s performance in 2018, including an $84M contract for Sheppard Air Force Base operations support, $60M task order for Naval Station Guantanamo Bay support and an extension on the Kuwait – Base, Operations and Security Support Services contract. 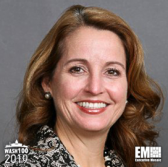