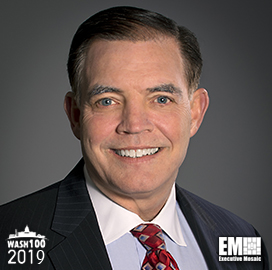 Executive Mosaic is pleased to announce that Chuck Prow, president and CEO of Vectrus, has been inducted into the 2019  edition of Wash100 “” Executive Mosaic's annual selection of influential leaders in the government contracting arena “” for securing major contracts and expanding Vectrus' position with numerous federal agencies.

This latest honor marks the fifth time Prow has received a Wash100 Award.

Vectrus won several contracts in 2018, including a $60 million task order under the Global Contingency Services Multiple Award Contract II in support of the Guantanamo Bay Naval Station in Cuba.

Vectrus secured firm-fixed-price contracts in the first half of 2018 including an $84 million contract for maintenance services at Sheppard Air Force Base in Texas. Prow explained the new contract helps Vectrus expand its position as an Air Force prime contractor with programs such as the Thule Air Base maintenance contract and the Air Force contract augmentation program.

Under a five-year, $43 million contract, Vectrus will provide maintenance support for a U.S. Army base in Stuttgart, Germany. Prow said the firm-fixed-price contracts expand the scope of work that the company performs within the U.S. European Command.

The company also received a potential $108 million contract in February 2018 to manage U.S. Army dining facilities in Kuwait. Prow said the DFAC 3.0 contract would help expand the company's base business.

In November 2018, Vectrus reported $308 million in revenue during the third quarter of 2018, reflecting a 14 percent rise from the previous year.

“Additionally, with 65 percent of 2018 new business wins based on contract value coming from the Air Force and Navy, we are also making great progress in diversifying our portfolio and expanding market share with clients that have not historically been large contributors to revenue,“ Prow said.

“We see additional opportunities to further expand our footprint with existing clients in the Department of Defense and intelligence community, as well as new clients in the federal civilian market,” he said.

Executive Mosaic congratulates Chuck Prow and the Vectrus team for receiving this award.