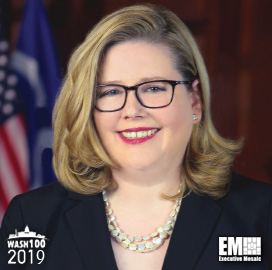 Executive Mosaic is pleased to announce that Emily Murphy, administrator of the General Services Administration, was inducted into the 2019 Wash100 “” Executive Mosaic's annual selection of the most influential voices in the government contracting arena “” for innovation in federal contracting and program management.

This latest honor marks the second time she received the award.

Murphy was confirmed by the Senate in December 2017 to lead the GSA after being nominated three months prior. She is responsible for over 11,000 employees and an estimated $55 billion in annual contracts. Under her stewardship the department recorded $6.1 billion in savings for its customer agencies during 2018.

The department announced in November 2018 that it would create a government-wide procurement vehicle that integrates 24 existing products and services. Part of the agency's federal marketplace initiative, the multiple award schedule simplifies the process for government buyers by allowing them to choose from over 10 million offerings. It also enables them to order directly from schedule contract holders or over the GSA Advantage web site.

Murphy revealed that GSA wants to transform acquisitions through the implementation of shared services, e-commerce portals and innovation identification. The department began implementation of a 10-year plan to establish a framework for its office of shared solutions and performance improvement.

During that time, she was picked as the agency's first chief acquisition officer, spearheading the transformation of assisted acquisition centers and consolidation of the Federal Supply Service and the Federal Technology Service. Additionally, Murphy oversaw a $60 million budget and standardized the agency's acquisition rules in annual procurement.

Murphy's other accomplishments at GSA include serving as the representative to the Federal Acquisition Regulatory Council and as leader of the Civilian Agency Acquisition Council, which governs procurement regulations. While holding these roles, Murphy updated regulations for the council and GSA to address the growing number of service contracts.

She worked for the U.S. Small Business Administration, helping the agency ““ for the first time ““ secure its statutory 23 percent prime contracting benchmark. She served nine years in the House of Representatives on the Small Business and Armed Services Committees, where she drafted reform packages intended to streamline the government contracting process. These reforms promoted greater competition for small businesses by minimizing barriers to entry, reducing regulatory burdens and eliminating waste.

Murphy worked in the private sector, holding senior leadership positions at a technology startup that obtained federal contracts and at two prominent law firms as a government contracts attorney.

Executive Mosaic congratulates Emily Murphy and the GSA for receiving this award.

Visit the Wash100 site to learn about the other 99 winners of the 2019 Wash100 Award. On the site, you can  submit your 10 votes for the GovCon executives of consequence that you believe will have the most significant impact in 2019.