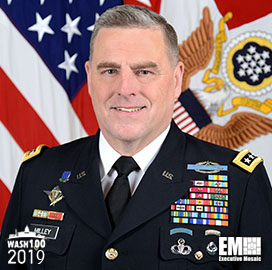 Executive Mosaic is pleased to announce Gen. Mark Milley, chief of staff at the U.S. Army, as an inductee into the 2019 edition of the Wash100 “” Executive Mosaic's annual selection of the most influential voices in the government contracting arena “” for supporting development of the service's competitive technology efforts.

Milley wrote a new vision statement for the branch with fellow 2019 Wash100 recipient Mark Esper, secretary of the Army, in June. The Army Vision calls for the development and utilization of weapons, aircraft, manned and unmanned combat vehicles, sustainment systems, arms formations, artificial intelligence and robotics to counter potential adversaries by 2028. The branch also seeks to bolster training for U.S. soldiers.

After evaluating each program in the Army's equipment portfolio, Esper and Milley identified $25B in funds to contribute to the service's top six priorities for modernization. The priorities include next-generation combat vehicles, network, soldier lethality, future vertical lift, air and missile defense and long-range precision fires.

Milley revealed at a House Defense Appropriation Subcommittee hearing in April that the branch intends to explore long-range weapon systems. Eventually, he believes the service can test and develop long-range precision weapons that could travel at nearly 3,800 miles per hour.

President Trump announced in late 2018 he would nominate Milley to succeed Gen. Joseph Dunford as the chairman of the Joint Chiefs of Staff. Dunford is due to retire in the fall.

With 35 years of experience in eight divisions, Milley commanded and served in numerous leadership positions before becoming the 39th Army chief of staff. He graduated and received his commission from Princeton University in 1980. He commanded the 1st Battalion, the 506th Infantry and the 2nd Brigade and served the commanding general for the International Security Assistance Force Joint Command and deputy commanding general of U.S. forces in Afghanistan. 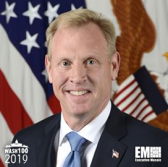