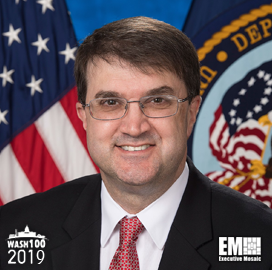 Executive Mosaic is pleased to announce that Robert Wilkie, secretary of Veterans Affairs, was inducted into the 2019 Wash100 “” Executive Mosaic's annual selection of the most influential voices in the government contracting arena “” for his achievements in modernizing the VA electronic health care system.

This honor marks the first Wash100 Award win for Wilkie.

Previously, he served as the department's undersecretary for personnel and readiness. Wilkie received Senate confirmation in July to lead the VA, succeeding David Shulkin. Wilkie served in an acting capacity before being nominated as permanent secretary.

Wilkie has spearheaded the move to a new electronic health records platform and modernize legacy IT systems. The effort includes supervising the potential 10-year, $10B contract awarded to Cerner in May to install the same EHR system used by the Department of Defense. At the time, Wilkie stated the VA budgeted $782M in 2018 funds to spend on implementation. The VA Office of Electronic Health Record Modernization will direct the preparation, deployment and maintenance of the platform.

Wilkie and former Defense Secretary James Mattis stated in September 2018 that the interoperable EHR system will allow for information sharing between the departments. Officials wanted a more streamlined and comprehensive system that enables unified decision-making and oversight functions; harmonized operations, data management and technology tools; and a single implementation schedule.

As part of its modernization efforts, the VA announced in January 2019 that it awarded three contracts to manage its network of care providers to Optum's public sector business. Optum will oversee parts of the VA Community Care Network, the department's contract vehicle for community health care services procurement. Wilkie said the new network was developed “based on feedback from veterans and other stakeholders“ and “lessons learned from the Veterans Choice Program.“

Until the new network is fully deployed, TriWest Healthcare will continue to support VA care. The department is expected to award the care network's fourth region contract by April, with the fifth and sixth region awards arriving before the end of 2019.

Speaking to the American Legion in August, Wilkie said overhauling the department's customer service experience is his chief priority. He expressed his desire to make veteran access to care easier. As part of this initiative, the VA will use artificial intelligence to analyze data and automate tasks.

Executive Mosaic congratulates Robert Wilkie and his staff for receiving this award. 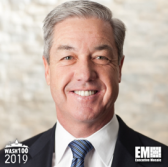