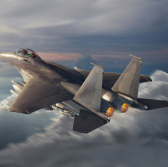 Boeing said it could hand over to the U.S. Air Force at least two engineering, manufacturing and development units of its Advanced F-15 variant as early as 2020, FlightGlobal reported Wednesday.

Boeing“™s defense, space and security business produces 12 Advanced F-15 units a year at its St. Louis-based facility and could bring that number to up to 35 aircraft per year.

The company said it can quickly produce F-15EX jets from its production line due to the plane“™s similarities to the Advanced F-15 aircraft.