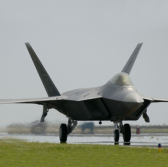 Lockheed Martin has teamed up with Red Hat to advance the use of Agile development practices and automated software tools in order to speed up the development and deployment of software platforms and other capabilities for the F-22 Raptor fighter aircraft, Signal Magazine reported.

Lockheed plans to field in the summer a communications capability for the fighter jet and Will Watkins, transformation lead for Red Hat Open Innovation Labs, said that capability was developed within a year through the use of Agile methods.

Watkins said eight Lockheed developers worked with a six-member team from Red Hat for an eight-week residency to accelerate software development through the adoption of Red Hat“™s OpenShift containerized platform and a set of automated tools on the AWS GovCloud platform.

“Our platform, the Red Hat OpenShift platform is the plumbing, the infrastructure for the factory … [Red Hat automated tools like] Ansible Tower and Satellite [version] six provide the automation and all of it weaves together“ with Agile processes, Watkins said.

He also discussed the development of an open systems architecture rack for the fighter jet, the Agile transformation process as a grassroots movement, Lockheed“™s use of 3D printing, simulation and emulation techniques and the transfer of skills learned through the Agile method to other employees through the Dojo phase.

Watkins said Red Hat will move to “more targeted conversations“ with C-level executives at Lockheed to “develop a vision of where they want to go in the next four to six months.”