The Rapid Aerial Extraction System is comprised of a winch, tether package and a stabilizer and is designed to equip fixed-wing aircraft systems with vertical lift features, MTSI said Wednesday.

As demonstrated in a company video, a metal pod connected to their aircraft is lowered to the rescue target, who puts on a parachute and harness that comes with the pod.

Once connected to the aircraft through the pod's stronger-than-steel line, the rescue target is lifted up and taken out of the danger zone, carried by the aircraft until more conventional rescue methods can be utilized in a safer location.

“What was previously denied ““ cargo and mobility operations due to time to respond, threats or detection of my aircraft, as well as an embedded rescue capability for a strike package allowing for response times before our enemy or traditional rescue could even respond ““ are now possible,“ said Peter LeHew, senior consultant at MTSI. 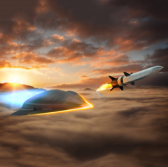