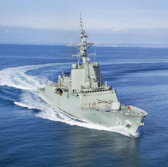 Fincantieri has fortified its FREMM frigate design with the addition of hundreds of tons of steel in order to meet the U.S. Navy“™s requirements for the FFG(X) guided-missile frigate development program, Defense News reported Friday.

“We did, like all the competitors, monthly technical exchange meetings with the government to make sure we were as compliant as possible going into detailed design and construction,“ said Rick Hunt, chief strategy officer at Fincantieri Marinette Marine and a retired Navy admiral.

“One of the things that the Navy wasn“™t going to budge on, and we agreed, was the toughness of the ship. So we added about 300 tons of steel on the design for the FREMM,“ Hunt added.

Other companies competing for the FFG(X) program are Austal“™s U.S. arm; Huntington Ingalls Industries; and the team of General Dynamics“™ Bath Iron Works subsidiary and Navantia.