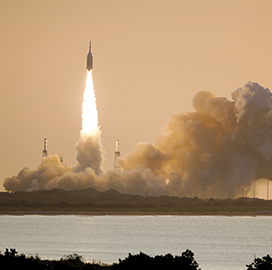 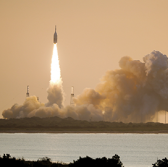 The Lockheed-built escape system dropped the Orion crew capsule using its jettison motor after its launch abort motors fired 400K pounds of thrust to move Orion away from the rocket during the test, the company said Tuesday.

The launch abort system with the mock-up capsule took off on a modified Peacekeeper missile from Cape Canaveral and its on-board computers started the abort sequence at an altitude of 31K feet.

“Hopefully this will be the last time we see this launch abort system ever work, but this test brings confidence that if needed on future Orion missions, it will safely pull the crew module and astronauts away from a life threatening event during launch,“ said Mike Hawes, Orion program manager at Lockheed's space business.

Northrop Grumman provided the abort test booster and two additional motors for the AA-2 flight test, which supports NASA's plan to perform human spaceflight missions to the moon and Mars aboard Orion and Space Launch System.

The ATB is based on Northrop's Minotaur line of launch vehicles and was delivered to the space agency through a contract with the U.S. Air Force's Space and Missile Systems Center.

The 16K-pound launch abort system was first tested in 2010 at White Sands Missile Range in New Mexico and consists of the abort motor, a jettison motor and an attitude control motor.