A reconstructed missile rocket motor will hold a mockup version of the Orion and take off to space for 55 seconds at an altitude of nearly 5.9 miles. Once the spacecraft reaches Mach 1.3 speed, its controllers will trigger the LAS to pull-out from the booster along with the capsule to simulate an abort operation.

“The data that we're collecting is crucial to verifying the models and show that the system is capable of protecting crew in the event of an emergency,“ said Jennifer Brown, principal engineer for the LAS' altitude control motor at Lockheed Martin. 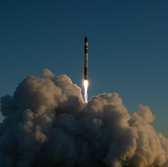