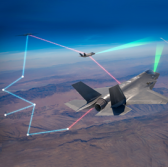 Lockheed Martin’s Skunk Works arm has teamed up with the U.S. Air Force and the Missile Defense Agency to demonstrate multidomain operations and secure data transmission across multiple systems.

During the demonstration, the ground-based air defense commander was able to decide and target a long-range missile threat immediately using sensor data transmitted by the F-35 through the U-2 aircraft.

Greg Ulmer, vice president and general manager for Lockheed’s F-35 program, said the demo seeks to unlock the potential of the fighter jet, which demonstrated its capability to share critical data, for multidomain operations.

Lockheed, MDA and the Air Force achieved four data points during the demo, including the ability to use the fighter jet’s sensor data for missile defense and U2’s open architecture, payload capacity and modular design to offer beyond-line-of-sight communications between the ground station and the F-35.