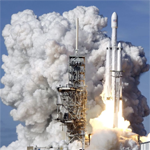 He told the publication that Falcon Heavy received the certification after completing three missions: a demonstration mission in February 2018; Arabsat 6A launch in April; and the Department of Defense“™s Space Test Program-2 mission in June.

“It“™s not certified for all of our most stressing national security space orbits,“ Thompson said. “We continue to work with SpaceX to mature their design and I think that“™s going well.“

A spokesman for the AFSMC said the service branch certified the SpaceX rocket for two Phase 1A reference orbits.

SpaceX, Northrop Grumman, United Launch Alliance and Blue Origin are competing for the second phase of the National Security Space Launch program. The companies should demonstrate that their space vehicles can transport a range of payload sizes and are certified for nine reference orbits.