The two companies partnered to build a missile system that will work to operate at a minimum speed of Mach 5 as the Department of Defense plans to invest in multiple hypersonic weapons programs.

Aerojet Rocketdyne produced supersonic combustion ramjet for the X-51A WaveRider plane that was built in 2013 through a collaboration between Boeing and the U.S. Air Force. 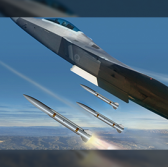