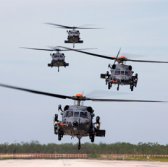 The service branch issued the decision after a joint team of Sikorsky and Air Force testing personnel subjected the aircraft to envelope expansion flights for more than 70 hours, Lockheed said Tuesday.

HH-60W is designed to carry out personnel recovery and search-and-rescue operations in support of military services. The aircraft is based on the Black Hawk helicopter and features a new fuel system that increases the UH-60M helicopter“™s tank capacity by twofold.