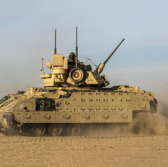 Raytheon and Rheinmetall Defense proposed the Lynx 41 infantry fighting vehicle for the OMFV program through their joint venture – Raytheon Rheinmetall Land Systems. The team was joined by Textron, which plans to produce the vehicle at its Louisiana-based facility.

General Dynamics“™ land systems business told the publication that it submitted its offer for the OMFV competition on Friday, Sept. 27, proposing a “purpose built vehicle“ featuring a 50mm cannon and technologies from other systems.

The Army issued a solicitation for the OMFV program in March. The service plans to award a pair of contracts to build 14 vehicle prototypes each.