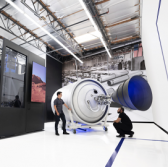 “With the close of our Series C funding, we are now one step closer to that vision by being fully funded to launch Terran 1 to orbit as the world’s first entirely 3D printed rocket,” Tim Ellis, CEO and co-founder of Relativity Space, said in a statement published Tuesday.

Terran 1 is a 3D-printed launch vehicle and is expected to transition to commercial service by early 2021.

The company has secured a two-decade Commercial Space Launch Act agreement with NASA for five test sites, a 20-year lease for a 220K-square-foot facility at the agency’s Stennis Space Center and a launch site right of entry from the U.S. Air Force at a Cape Canaveral-based launch complex in Florida. It also secured satellite launch services contracts from Telesat, mu Space, Spaceflight Industries and Momentus.