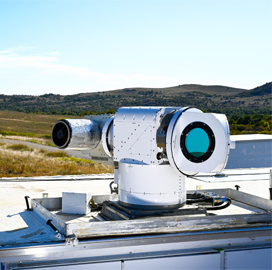 Lockheed Martin has showcased a laser system designed to defeat rotary and fixed-wing unmanned aerial systems as part of a demonstration for the U.S. Air Force.

ATHENA is also intended to be transportable to support the protection of critical assets and military bases.

The exercise took place at a Fort Sill test range in Oklahoma.