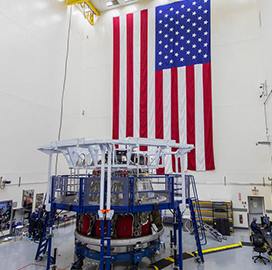 NASA plans to launch the flight test of the Crew Dragon spacecraft with SpaceX in December or later from NASA Kennedy Space Center’s Launch Complex 39A.

SpaceX will set Crew Dragon up to demonstrate an in-flight launch abort, NASA said Wednesday. The company will attempt to have Crew Dragon separate from the Falcon 9 rocket and simulate an abort procedure intended for in-flight emergencies.

The upcoming demonstration also aims to certify Crew Dragon for NASA’s transport operations in support of the International Space Station.

The in-flight abort test will follow a series of static fire engine trials that SpaceX completed recently in preparation for the launch.