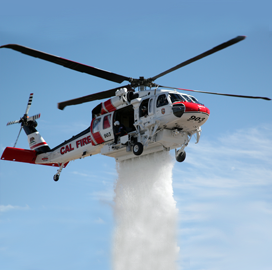 The S-70i Firehawk is designed to help fire crews deter wildfires, rescue firefighters and civilians and carry up to 12 firefighters, Lockheed said Monday.

CAL FIRE is slated to receive eight more aircraft units as part of a delivery order and is eligible to exercise an option for three more units.

Sikorsky manufactured the helicopters before they were delivered to United Rotorcraft for customization into firefighting units.