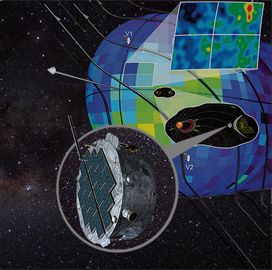 NASA has conducted critical review efforts for a Johns Hopkins Applied Physics Laboratory concept that will work to analyze space particle acceleration processes as well as the interaction of solar wind and cast-off winds from other stars.

The Interstellar Mapping and Acceleration Probe cleared a Key Decision Point-B review and has transitioned to the preliminary design phase, APL said Tuesday.

The probe will take part in a group of NASA heliophysics missions to study the boundaries between the heliosphere and interstellar space. A team of scientists and engineers developed plans for 10 scientific instruments that will be used by IMAP, with seven developed to gather material samples that reach the earth's surface from space such as interstellar neutral atoms.

“IMAP is a critical new mission of exploration and discovery about the heliosphere “” our home in space “” and this is a critical step forward in it,“ said David McComas, IMAP principal investigator and vice president at Princeton University's Plasma Physics Laboratory.

APL has been given $564M in funds for the development of the IMAP mission.