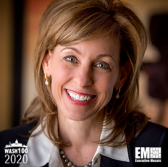 Executive Mosaic is pleased to present Leanne Caret, president and CEO of Boeing Defense, Space & Security, as an inductee of the 2020 Wash 100 Award for her leadership in developing Boeing’s Starliner spacecraft, securing major defense contracts and accelerating influential aerospace technology.

Caret’s efforts have continued to advance the company’s presence in the defense sector in 2019, and she has added space exploration as a central initiative. Most notably, Caret supervised Boeing’s first spacecraft launch: the CST-100 Starliner.

Boeing’s CST-100 Starliner capsule landed at White Sands Missile Range in New Mexico on Dec. 22, 2019. The reusable Starliner became the first crew vehicle and first capsule to touch down on American soil after an orbital trip since the space shuttles retired in July 2011.

“It was an absolute bullseye, better than I think anybody anticipated,” NASA Administrator Jim Bridenstine and fellow 2019 Wash100 Award recipient said of the landing. “That’s good for the agency, it’s good for Boeing; that’s good for the United States of America.”

The landing has marked a major step toward Starliner carrying humans to space in the commercial vehicle. Additionally, Boeing sent along an nonhuman passenger aboard Starliner, Rosie the Astronaut, nicknamed “Rosie the Rocketeer.”

Caret supervised the development of Rosie, an innovative aircrew training device integrated with hundreds of full-body sensors that will monitor, measure and track critical data points to simulate and predict what human astronauts would experience if they were on board Starliner. Boeing plans to launch crew flight tests in 2020 and organize all the data and research.

Boeing has also moved the headquarters of its space and launch division from Arlington, Va., to Florida’s Space Coast in Titusville to further build up integration and collaboration across its portfolio of space programs.

“Looking to the future, this storied Florida space community will be the center of gravity for Boeing’s space programs as we continue to build our company’s leadership beyond gravity,” said Caret.

In addition to Boeing’s space development, Caret has also made advancements in the company’s aerospace defense. Caret supervised and secured Boeing a potential 10-year, $14.3B contract to modernize weapons systems used on the U.S. Air Force’s B-1 Lancer and B-52 Stratofortress bomber platforms in April 2019.

A combined U.S. Air Force and Boeing flight test team completed a five-year project on the Advanced F-15 aircraft in Jan. 2019. They tested the aircraft’s systems and flight controls in Palmdale, Calif. More than 15K test points were covered to assure safety, quality and performance.

In April 2019, Boeing received a $91.3M contract modification from the U.S. Air Force to manufacture high-speed computing systems designed to process mission data on F-15 jets. The company will continue to produce and integrate Advanced Display Core Processor II boxes into the fighter aircraft, under Caret’s command, through Dec. 2021.

Caret herself facilitated the transfer of the two KC-46A Pegasus tankers to the Air Force in Jan. 2019. They will be housed at McConnell Air Force Base in Kansas and eventually deployed for aerial refueling operations.

“We look forward to working with the Air Force, and the Navy, during their initial operational test and evaluation of the KC-46, as we further demonstrate the operational capabilities of this next-generation aircraft across refueling, mobility, and combat weapons systems missions,” said Caret.

Executive Mosaic congratulates Boeing and Leanne Caret for her 2020 Wash100 Award selection. Caret’s dedication to space innovation and the progression of aerospace technology will be influential to the GovCon sector throughout 2020.

The Wash100 award, now in its seventh year, recognizes the most influential executives in the GovCon industry as selected by the Executive Mosaic team in tandem with online nominations from the GovCon community. Representing the best of the private and public sector, the winners demonstrate superior leadership, innovation, reliability, achievement and vision.