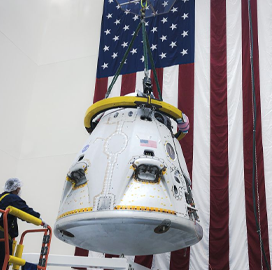 SpaceX has completed a hot-fire test for a Falcon 9 rocket that will support a scheduled in-flight abort test for the Crew Dragon spacecraft, Space.com reported Sunday.

Nine Merlin engines installed within the rocket’s first stage yielded 1.7M pounds of thrust during the demonstration. The company filled Falcon 9 with kerosene and liquid oxygen propellants in preparation for the test.

Crew Dragon is built to bring astronauts to and from the International Space Station as part of NASA’s Commercial Crew Program. A Falcon 9 rocket will deploy the capsule Jan. 18 to test its safety measures in the event of a rocket failure.

During the safety test, a built-in software tool will activate the capsule’s launch abort capacity in mid-flight while a suite comprised of SuperDraco engines will pull the CrewDragon prior to its descent via a parachute.