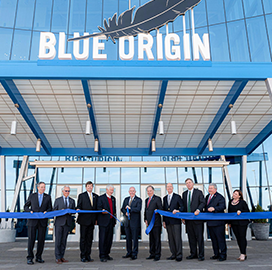 Blue Origin has inaugurated a new factory in Huntsville, Ala., that will work to accommodate high-rate production efforts for two rocket engines.

The company said Monday it has invested more than $200M and is set to provide over 300 job openings for the facility, which will manufacture BE-3U and BE-4 engines.

Bob Smith, CEO at Blue Origin, noted the firm has moved to back the development of reusable rocket engine systems.

The BE-7 lunar landing engine is currently being assessed at NASA’s Marshall Space Flight Center, where the BE-3U and BE-4 engines are also slated to undergo testing.

Denver-based software company Palantir Technologies is scheduled to debut Wednesday on the New York Stock Exchange through direct listing and NSYE said the company’s listing will have a reference price of $7.25 a share, CNBC reported Tuesday.

CACI International will continue to help the Department of Defense's comptroller office manage, secure and maintain financial systems under a potential $59M task order. “CACI looks forward to providing DoD budget expertise and technology to the Office of the Under Secretary of Defense with comprehensive support in modernizing and maintaining our customer’s critical mission systems," said John Mengucci, president and CEO of CACI and a 2020 Wash 100 awardee.