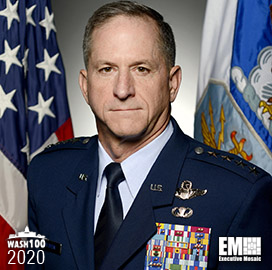 Executive Mosaic is honored to announce Gen. David Goldfein, chief of staff of the U.S. Air Force, as an inductee into the 2020 edition of the Wash100 Award for his efforts to advance digital architecture, software and operations as well as weapons and space capabilities for the USAF.

This marks Goldfein’s second Wash100 Award. He earned his first Wash100 Award in 2017 for his leadership in advancing the service branch’s collaboration with industry.

Goldfein acknowledges the Air Force’s need to establish a digital architecture. In November, he announced that the service plans to use a part of its fiscal 2021 budget to create the digital foundation.

Goldfein called for the military to transition from hardware-focused purchasing approach to one that focuses more on software, which he said is critical in connecting missions systems across ground, sea, air, space and cyber domains.

“Future wars will be won by the side with the most relevant apps and a network to link all its weapons,” he wrote. “One of our most important goals is helping to figure out how to build the connective network we will need to win future wars. And we must make such network development enticing and profitable to American industry.”

“Victory in future combat will depend less on individual capabilities and more on the integrated strengths of a connected network available for coalition leaders to employ,” Goldfein said.

He also discussed the move toward a multidomain operations approach in his speech at the Air and Space Power Conference in London in July 2019. “Where we are going is using dominance in one domain or many, blending a few capabilities or many, to produce multiple dilemmas for our adversaries in a way that will overwhelm them,” Goldfein noted.

The development of hypersonic weapons is one of the technology efforts the Air Force is pursuing. In an interview published in August 2019, Goldfein said the service expects the hypersonic conventional strike weapon program to reach initial operational capability in 2022.

Goldfein also cited the role of commercial space capabilities in improving nuclear triad operations. He noted that commercial satellites and other low-Earth orbit technologies will provide nuclear command, control and communications operators with “resilient pathways to communicate” while enabling the Air Force to reduce costs.

Executive Mosaic congratulates the Air Force and Gen. David Goldfein on his 2020 Wash100 Award selection. His efforts to improve the capabilities of the U.S. Air Force and advance the service branch’s technology could make a significant difference in 2020.