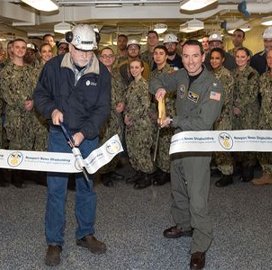 “Our completing and turning over these spaces to the crew will allow them to start on-hands, shipboard training and learn the systems and components they will operate when the ship joins the fleet," said Mike Butler, the ship’s program director.

The compartments include offices, a training center and shelter for sailors. The ship began boarding its initial crew in early February.

Remaining construction and tests will continue throughout the next two and a half years.