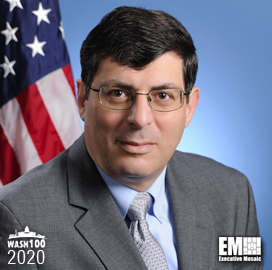 Executive Mosaic is thrilled to present Christopher Scolese, director of the National Reconnaissance Office, as an inductee into the 2020 edition of the Wash100 Award for advancing the office’s space initiatives, developing new satellite systems and forging new partnerships for proactive defense.

This marks Scolese’s first Wash100 Award. He was appointed as the 19th director of the National Reconnaissance Office Aug. 5. Prior to joining NRO, Scolese served as director at NASA’s Goddard Space Flight Center, where he was responsible for the oversight and integration of NASA's programmatic and technical efforts to ensure the successful accomplishment of the agency’s overall mission.

Scolese will bring his knowledge of program development and implementation of civil space initiatives to the NRO. Since he has assumed the new role with the office, Scolese has advanced the development and research within the NRO, growing the office’s reach and knowledge.

Most notably, Scolese has continued to investigate the influence China has on the nation’s space development. Scolese said the agency is focused on staying ahead of China in the continuing space race. In addition, he said in December that the NRO plans to create closer ties with U.S. Space Command to ensure the nation’s satellites can be defended during a conflict.

Scolese has supervised new efforts to modernize satellites and ground systems to improve the speed and quality of data. “One of our priorities is on-board processing so we can deliver data more effectively to the warfighter in the field and help get information from the sensor to the user as quickly as possible,” he said.

The NRO has also expressed interest in using small satellites to take advantage of the growing availability of smaller launch vehicles to provide a faster response. The NRO has planned upgrades to utilize its cloud computing infrastructure and enact artificial intelligence to help analysts work more efficiently.

In addition, Scolese will continue to oversee NRO’s operations of a variety of satellites. “Physics ultimately decides how big or how small and how many,” Scolese said. “Clearly we’re going to need a diverse architecture. We’re very much looking at proliferated architectures to increase revisit time, to reduce latency and provide resilience and fast refresh when you need it.”

To quickly implement NRO’s new initiatives, the NRO and U.S. Space Command forged an agreement in September to defend the nation’s spy satellites during a conflict in space.

“Space Command’s mission to protect and defend all U.S. satellites will enhance the survival of NRO intelligence collection satellites and enable continuation of the national intelligence mission deep into conflict,” said Scolese. “Exercises like the Schriever Wargame provide us an opportunity to test and improve our joint planning process and shared defensive action ‘playbook’ to preserve assured access to space.”

According to the statement, the agreement between the NRO and US Space Command does not constitute a formal command relationship nor does it transfer satellite control authority.

Prior to joining the NRO, Scolese advocated for private/public partnerships in June. During a Senate hearing, he announced that government agencies need to partner with industry on space technology development.

“I believe that neither the government nor the commercial sector alone can maintain the level of performance needed to keep the U.S. competitive in space, given the ambitions of our adversaries, so partnership with private industry is not only beneficial, but also necessary,” he said.

Executive Mosaic congratulates NRO and Christopher Scolese on his 2020 Wash100 Award. Scolese’s continued dedication to the development of space technologies and satellites and his solidification of new partnerships prove that he is a notable figure in the GovCon sector and a leader within the agency.

This year represents our sixth annual Wash100 Award selection. The Wash100 is the premier group of private and public sector leaders selected by Executive Mosaic’s organizational and editorial leadership as the most influential leaders in the GovCon sector. These leaders demonstrate skills in leadership, innovation, achievement, and vision.