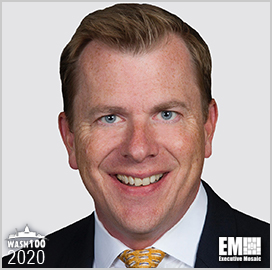 Executive Mosaic is pleased to introduce Aaron Weis, chief information officer at the Department of the Navy, as the newest inductee into the 2020 edition of the Wash100 Award for his guiding principles to drive DON’s information technology and cyber readiness goals.

This marks his first Wash100 Award. Weis assumed the CIO role in late September, following completion of the Secretary of the Navy Cybersecurity Readiness Review. Weis will continue to lead the establishment of an information management strategy in a push to address the branch's risk priorities. Modly performed CIO responsibilities prior to Weis' appointment to the role.

"The empowered CIO is chartered with developing and implementing an overall vision and strategy to guide the department over the next five years to modernize our technology; apply current and emerging technology to bring winning transformative capabilities to our Sailors, Marines and civilians; and defend our information by making cyber hygiene and operations a priority," he wrote in his introductory column.

Weis said in October that he would leverage his 28 years of industry experience and previous work as Department of Defense CIO's senior adviser in his new capacity.

He led the development of DoD's enterprise cloud and IT modernization strategies as well as the first-ever CIO accreditation of its $46 billion IT budget.

His private sector career includes time as senior vice president and CIO of Axalta Coating Systems and as the first CIO of Sensata Technologies, where he drove IT integration efforts during the latter company's separation from Texas Instruments.

After his appointment, Weis used his experience to enact a new cyber initiative within the Navy. He announced in Nov. 2019 that he will redeem the Navy by showing improvement in a follow-up cyber review.

“I’m hopeful that at some point we’ll get an opportunity to get a better grade, and I’m sure we’ll do that,” Weis said. He also commented on The Pentagon’s Cybersecurity Maturity Model Certification (CMMC) to create accreditation standards contractors must meet if they want to do work with any part of the Department of Defense (DoD).

Weis said with the CMMC, DoD has “the right perspective on this…I’m a big believer in that model,” he said, referencing that it’s “table stakes” for other industries, like those for chemical or automobiles. “And they’re not going to pay for you to go get certified. You’re going to do that on your own because you want to do that work. And that’s kind of a ticket to entry.”

After Weis’ announcement in November, he reported new plans and developments to expedite the Navy’s IT platforms. Navy officials noted that they expect to see a coordinated effort to improve IT in March 2020.

Weis noted that a “single, unified transport layer that’s flatter and easier to defend.” Weis said that the new service branch developments will take advantage of software-defined networking that will allow sailors and Marines to share information.

Additionally, he stated that the Navy will aggressively adopt a cloud-based infrastructure that will allow for modern software design. With a more streamlined approach, processes and approvals that today take years could shrink to weeks, he said.

“Cyber is a buzzword…But it doesn’t describe what we’re trying to do. And what we need to do is defend our information wherever it is. Whether it’s at rest, whether it’s in training, whether it’s supply chain, defense, industrial base, you name it, we should be defending it in a way we’re not today,” Weis added.

Executive Mosaic congratulates Weis and the U.S. Navy for their selection to receive the 2020 Wash100 Award. His commitment to strengthen cyber posture at the Navy and advance defense technology will be influential to the GovCon sector, and show promise for IT modernization moving into 2020.

This year represents our sixth annual Wash100 Award selection. The Wash100 is the premier group of private and public sector leaders selected by Executive Mosaic’s organizational and editorial leadership as the most influential leaders in the GovCon sector. These leaders demonstrate skills in leadership, innovation, achievement, and vision.