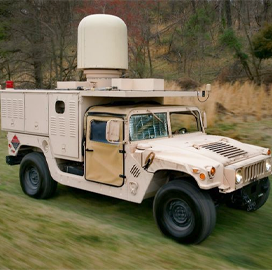 The company said Wednesday it tested its Highly Adaptable Multi-Mission Radar, or HAMMR, while the radar was mounted on a High Mobility Multipurpose Wheeled Vehicle, or Humvee, at Eglin Air Force Base in Florida.

Users may deploy the radar in either 360-degree-view or sector-only modes to conduct surveillance, cue weapons and acquire counter-fire targets.

“This first-of-its-kind demonstration validated the sense on-the-move capability in concept for the Department of Defense’s IAMD enterprise and proved that this capability can be developed and fielded to warfighters much sooner than anticipated,” said Mike Meaney, vice president of land and maritime sensors at Northrop Grumman.