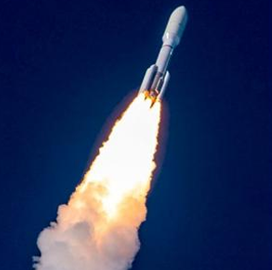 Gen. John Raymond, chief of space operations at the Space Force and a 2020 Wash100 Award recipient, said the AEHF-6 mission serves as the first national security space launch for the new service branch.

“We understand the critical importance of delivering protected communications to strategic command and tactical warfighters operating on ground, sea and air,“ said Tory Bruno, president and CEO of ULA and a former Wash100 winner.

In a separate release, Lockheed said that AEHF-6 separated from Atlas V around five hours and 45 minutes after launch. The satellite is currently responding to ground-control commands.

“This is a great milestone to share with the U.S. Space Force's Space and Missiles Systems Center,“ said Mike Cacheiro, vice president for protected communications at Lockheed's space business. "I am incredibly proud of the teams that made this happen over the many years supporting the program."

ULA's Atlas V rocket also carried the satellite's predecessor, AEHF-5, to orbit in August 2019. Lockheed secured a $1.9B contract to manufacture the two satellites in 2013.

ULA is slated to launch another Space Force mission, USSF-7, in May.