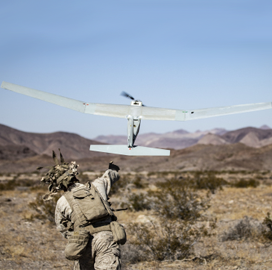 The platform weighs 15 pounds with a wingspan of 9.2 feet and can operate up to two-and-a-half hours within a 12.4-mile range. It also houses a long-range tracking antenna and a Mantis i45 electro-optical/infrared sensor system for expanded flight hours and optimized imaging features.