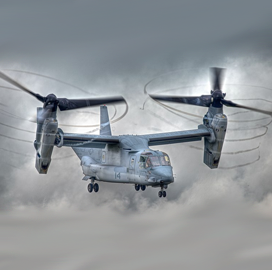 Textron’s Bell subsidiary has begun conceptual studies to inform the development of a version of its V-22 Osprey aircraft intended for VIP customers such as heads of state, FlightGlobal Magazine reported Wednesday.

The V-22 tiltrotor aircraft, which Bell currently manufactures in partnership with Boeing, has a capacity of 24 personnel and is currently used for troop transport missions.

According to a statement from Bell, the company plans to “assess some of the options available” for a VIP-focused V-22 aircraft including an expanded layout and three-person seating.

However, Bell noted that it has “no current plans to certify” the VIP Osprey for civilian applications.

The U.S. Air Force, Navy and Marine Corps have all deployed the V-22 for their respective missions. The government of Japan also uses the tiltrotor aircraft as Bell’s only foreign military sales customer.