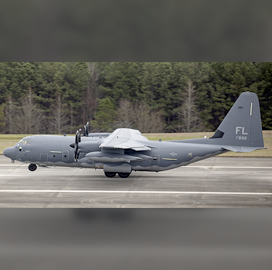 Lockheed Martin has transported an HC-130J Combat King II aircraft from a production facility in Marietta, Ga., to the Patrick Air Force Base in Florida for the AF Reserve’s 39th Rescue Squadron.

The fixed-wing personnel recovery platform is a variant of C-130J Super Hercules and built with an integrated defensive suite, digital avionics and an automated maintenance fault reporting system, among other features, the company said Thursday.

"HC-130J provides the Citizen Airmen with increased power, capability and performance to continue to support critical missions close to home and around the world," said Rod McLean, vice president and general manager of air mobility and maritime missions at Lockheed.

The company has delivered more than 450 C-130J airlifters to military customers in 20 countries to date, with the U.S. government operating the highest number of that aircraft.