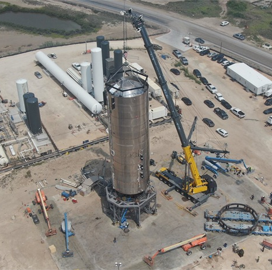 SpaceX cleared a cryogenic pressurization test for the fourth prototype unit of a rocket designed to support missions to the moon and Mars, SpaceNews reported Monday.

The company placed liquid nitrogen fuel into the Starship SN4 rocket to validate its capacity to hold cryogenic propellants under pressure during the test.

Elon Musk, CEO at SpaceX, said in a tweet the rocket should be “physically ready” for a test flight in the following weeks. He noted the company will incorporate a Raptor engine into Starship in preparation for a static fire test and a short “hop” demonstration that will launch the vehicle to an altitude of 492.1 feet.

The fifth Starship prototype will feature a nose cone segment and three Raptor engines, while its flaps and aerodynamic surfaces are being redesigned.