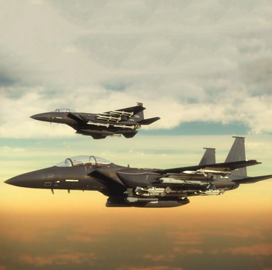 The U.S Air Force is looking for potential sources of propulsion technologies that can be integrated into weapons systems installed in next-generation F-15EX fighter aircraft.

The service branch said in a SAM notice posted Friday that it is conducting market research on commercially available propulsion systems such as engine components to support the integration of new technologies into the Boeing-built aircraft.

According to the sources-sought notice, the Air Force plans to procure up to 461 engines for the F-15EX Program, which was launched in an effort to replace the service’s legacy F-15C/D fighter jets.

Integration work may include design, development and airworthiness testing activities that may take place concurrently with engine production. The Air Force intends to begin receiving the shipments by June 2023.