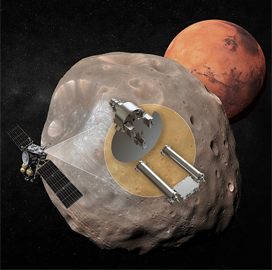 Johns Hopkins University Applied Physics Laboratory has completed a mission confirmation review for a spectrometer technology designed to support Japanese spacecraft on a mission to study the two moons of Mars.

The Mars-moon Exploration with GAmma Ray and NEutrons instrument will fly on Japan's Martian Moons eXploration vehicle and is being developed through NASA's Discovery Program, APL said Tuesday.

Prototype hardware development and test efforts will take place at APL in the coming months to determine whether the spectrometer can withstand mechanical and thermal environments during the MMX mission.

The team will then deliver the technology to Japan for an interface demonstration with spacecraft electronics.

NASA plans to conduct a critical design review of the instrument in February.