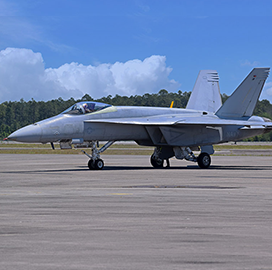 The U.S. Navy's flight demonstration squadron has received a Boeing-built test unit of the Super Hornet fighter aircraft, the first of 11 jets the company expects to deliver this year.

The Blue Angels will fly the multirole aircraft at the Naval Air Station Patuxent River in Maryland during test and evaluation activities, the company said Wednesday.

Boeing modifies F/A-18 Hornet and Super Hornet jets for the squadron at the Cecil Field facility in Florida by adjusting the center of gravity and adding a smoke generator oil tank, navigation and camera systems.

The military team has used three other aircraft platforms from the company over the past five decades. Those platforms are the F-4J Phantom II, A-4F Skyhawk and the F/A-18A-D Hornet.