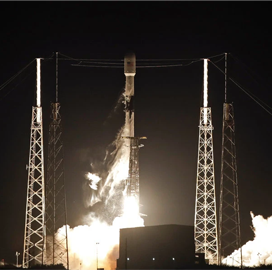 SpaceX has launched another group of Starlink satellites along with a deployable visor satellite to low-Earth orbit as part of efforts to provide broadband services while reducing the impact of satellite brightness, SpaceNews reported Wednesday.

The eighth Starlink mission saw SpaceX’s Falcon 9 rocket lift off with the batch of 60 satellites from Cape Canaveral Air Force Station in Florida on Wednesday at 9:25 p.m. Eastern time.

Patricia Cooper, vice president of satellite government relations at SpaceX, said at a webinar hosted by the Satellite Industry Association and American Astronomical Society that SpaceX intends to integrate visors to all Starlink satellites moving forward.

“We would have about 500 satellites at their current brightness, and then all satellites beyond that would have these sunshades,” she noted.

To date, SpaceX has sent 482 of the Starlink platforms to serve as part of the company’s planned constellation of 12K broadband satellites. SpaceX also intends to expand the constellation to 42K to support internet services across parts of the U.S. and Canada, according to the report.