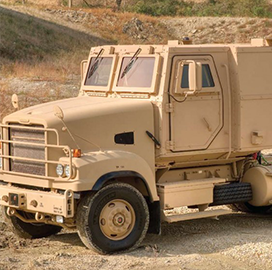 The U.S. Army has issued a request for information to determine potential sources of heavy tactical trucks that could perform semi-autonomous and autonomous transportation missions, Inside Defense reported Friday.

The service branch envisions its Next Generation Future Truck platform with a multiaxle design, an autnomy technology and a payload area.

Five variants are planned for the NGFT, including a tanker configuration with a 2,500-gallon fuel capacity and a "wrecker" variant to recover and evacuate tactical wheeled vehicles that are over 40 tons.