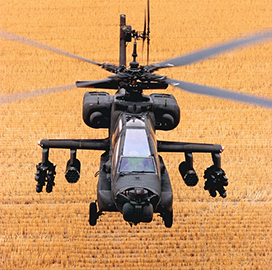 Boeing has completed the 2,500th delivery of the AH-64 Apache, a new milestone for the attack helicopter being used by the U.S. Army and international customers.

The company said Tuesday it delivered an E-model of the military aircraft from a facility in Mesa, Ariz., to the service branch.

The E configuration features a suite of situational awareness, communications and navigation systems,  a multicore mission processor and a fire control radar designed to detect sea-based enemies in a maritime environment.

A 701D engine propels the Apache as the split-torque face gear transmission facilitates the flow of power.

McDonnell Douglas, a heritage company of the Chicago-based planemaker, supplied the Army's first Apache in 1984.