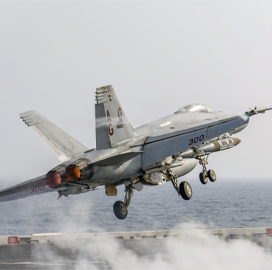 Boeing has added a 20th F/A-18 Super Hornet from the U.S. Navy to a program aimed at extending the service life expectancy of the branch's multirole fighter jets.

The service branch tasked Boeing to extend the lifetime flight hours of 24 Super Hornets from 6K to 7,500 through system enhancements and accepted delivery of two SLM jets, the Chicago-based planemaker said Monday.

The company expects to receive an additional contract later this year for SLM inductions over the next two years, integration of Block III features and further life extension to reach 10K hours.