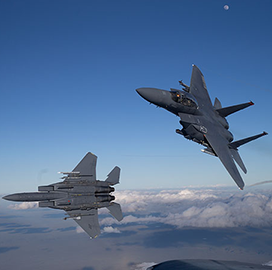 Raytheon Technologies said Thursday its intelligence and space business will provide eight APG-82(V)1 radars that are designed to detect surface and airborne targets at long distances under a contract.

RI&S is scheduled to begin delivering the technology to Boeing later this year and continue shipments through 2022.

The Chicago-based planemaker secured a potential $22.9B F-15EX production contract from the Air Force in July, with a $1.2B delivery order for the initial lot of eight new fighter jets.

Raytheon Technologies noted it has provided over 150 APG-82 systems to defense customers worldwide.